Interest rates: where are we at?

After the January labour force data was released by the ABS, at close of trade on Thursday February 7 the ASX 30 Day Interbank Cash Rate Futures March 2013 contract was trading at 97.105.

As is immediately evident from this settlement figure, given that the Reserve Bank does not next meet until March 5, this places the likelihood of the cash rate in March falling from 3.00% to 2.75% at somewhere close to a coin flip.

In fact, the ASX target rate tracker suggests exactly that, indicating a 50% chance of a cut in March.

While duly noting that the yield curve is an implication rather than a prediction, the implied yield curve of the aforementioned cash rate futures appears thus: 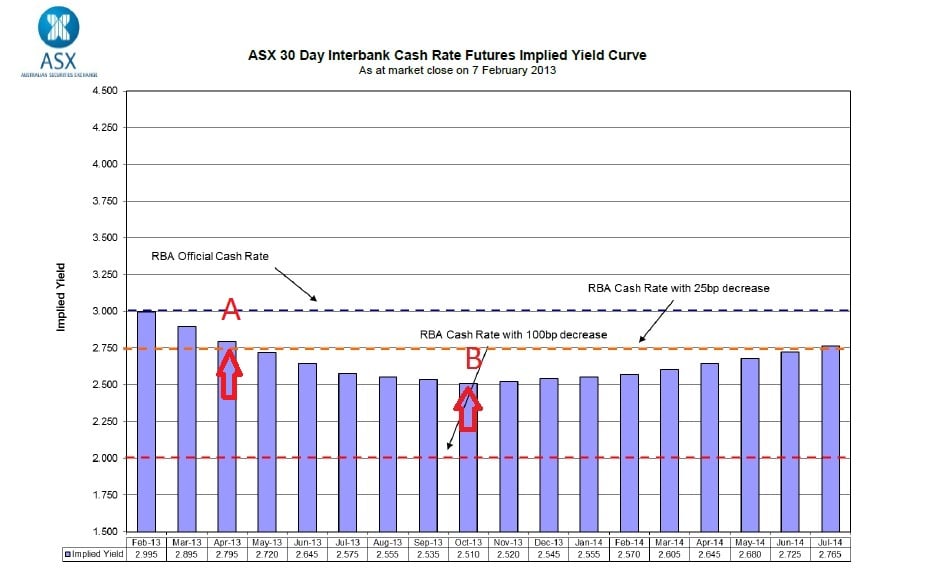 The implied curve remains demonstrably inverted and strongly suggests that the cash rate is likely to be cut again this year to a new low of just 2.75%, perhaps as soon as April (Point A).

Further, the implied nadir of just 2.51% in October 2013 (Point B) indicates that two further interest rate cuts remain eminently possible in this cycle.

Some prominent commentators have called an end to the easing cycle due to resurgent iron ore prices (the iron ore spot sitting remarkably close to testing new recent highs at above $155/tonne), promising if not compelling dwelling price data over recent months, a gradually easing Australian dollar and the All Ordinaries index threatening 5,000 and levels not seen since the middle of 2008.

Others highlight with some justification that, as can be seen in the ABS graph below, we have an economy which comprises a thriving mining sector and little else to write home about. Weak retail figures for December have added further urgency to the clamour for another rate cut.

Others still change their mind on a near-daily basis as if playing a peculiar, myopic game of Monetary Policy Ping-Pong.

The global outlook and sentiment will naturally continue to play its own role.

The blunt tool and the great transition

Being a Reserve Bank Governor is a fairly thankless task, but Monetary Policy in recent times has largely been transparently applied and in a consistent manner.

One of the great quandaries for a central bank is how to most effectively utilise its blunt interest rate tool to manage a range of conflicting challenges and sectors of the economy (be thankful we’re not living in the Eurozone). Thus expect plenty of gainful employment of the Reserve Bank jawbone over the testing period ahead.

Australia imminently faces an awkward transition from the summit of the mining capital investment boom to the subsequent production phase. It is precisely whether this “Great Rebalancing” can be successfully managed that divides the optimists from the pessimists (who would doubtless prefer the moniker of ‘realists’).

What for property investors?

The January labour force data revealed some interesting trends with the two-speed economy still very much in evidence.

The headline rate of unemployment remaining flat at just 5.4% was somewhat unexpected and potentially represents an unemployment rate which could yet peak at a surprisingly low figure in this cycle.

What the headline unemployment rate masks is an increase in the numbers of those employed part-time, a lower participation rate and a declining total number of hours worked. For this, and a number of other reasons, it can be reasonably argued that unemployment will over time move higher than the figures currently reported.

Through drilling into the state-by-state figures we can see that particularly Queensland and perhaps more surprisingly New South Wales have shown strong jobs growth over the past year. And, as we might expect, unemployment is very low in resources-rich Western Australia at just 4.0%.

These figures support a prevailing notion that the property market outlook in Sydney and Perth is stronger than in other capital cities, and may also imply that brighter times lie ahead in Brisbane and in certain other Queensland markets.

It’s too early to make an informed call on the March 5 Monetary Policy decision, but relatively benign CPI prints – a headline inflation of just 2.2% and core inflation only a notch higher – have certainly left ‘room’ for another interest rate cut as and when it is required.

On balance, therefore, it is reasonable to suggest that we may see a new low cash rate of just 2.75% at some point in the coming months.